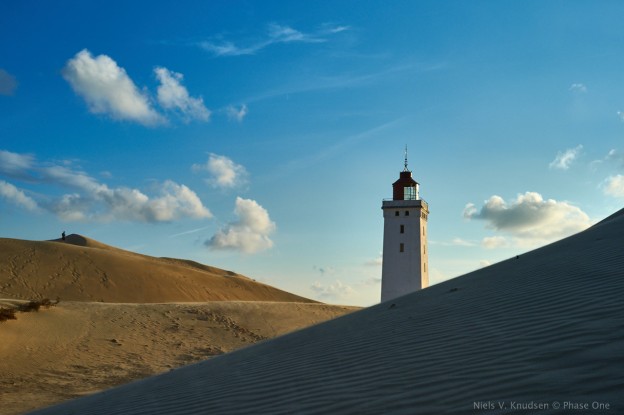 A new and powerful feature in Capture One Pro 8 is the Repair Layers.

The Repair Layers are designed to make it easy to remove unwanted objects in an image like for instance power cables or people walking into the frame.

When I was shooting the image above the light was just perfect and the clouds were nice positioned on both sides of the old lighthouse. The only problem was the many tourists walking in my frame.

Not the perfect shot

Knowing that Capture One Pro 8 has the Repair Layer feature and that it would be a simple task to remove the unwanted people in the frame, I decided to take the picture rather than hoping that the people would go away before the light and the sky had changed.

The image to the left is straight out of the camera. The image to the right is after removing the unwanted people in the scene and adding some basic corrections in the Exposure tool tab.

In the Local Adjustments Tool simply press the “+” button to add a new layer.  By default it gives you an Adjustments Layer, but by holding down the mouse on the “Adjustment” button in the Layer you will have the option to change the layer into a Clone or a Heal Layer.

You can also directly add a specific kind of Layer by holding down the “+” button in the Local Adjustments Tool. This will give you a drop down to select among the different kind of layers.

Set source and destination for you Repair Layer:

I will start by removing the long shadow in the sand dune, so I add a new Heal Layer.  I zoom into the image and adjust my brush size so it is about the size of the thickness of the shadow.  For a Heal Layer I normally use a hardness around 50. If I use a Clone Layer, I often uses a hardness between 0 and 40.

The white circle indicates the source point for the Repair layer and the orange circle shows the destination area.

I can always re-adjust the source and destination points by simply dragging the circles.  Now with the source and destination points established, I can simply brush over the shadows in the sand dune. While brushing, the algorithm uses the simpler and faster Clone method, but when you let go of the brush, it optimizes the cloned data to blend it into the color and lightness of the background.  After you have brushed your Repair Layer you still have the option to change you layer from a Clone to Heal layer or vise versa.  This means that if you are in doubt about which method to use you can just start with one type of Repair Layer and then later change to the other kind of Repair Layer to see if it works better.

With two long brush strokes I remove the shadows in the sand dune. Here I used the option to show the mask strokes.  The Heal Layer does a fantastic job in making the repaired area blend smoothly into the background layer so it is almost impossible to see what is the original image and what is repaired.

Now I would like to remove the remaining part of the two people climbing the dune.

In the first image I set the source and destination points. I do it so the source and destination points are parallel to the ridge of the dune. This will ensure that the ridge will be perfectly repaired.  In the second image you can see my brush strokes and in the image to the right you can see the final result of moving the two people and their shadows.

Using similar ideas for setting the source and destination points in combination with an appropriate selection of brush size, I could easily remove the unwanted people in the image by applying only four Repair Layers.

I deliberately left one person in the image just add dimensions to the image.

Full freedom for editing an image with Repair layers

The Repair Layers in Capture One Pro 8 work on the raw images. This gives you full freedom to work with the image and to do whatever adjustments you would like to do with the image both before and after you have done a Repair Layer.

Wonderful new function in Capture One. I work now for 9 years with capture One and never seen anything compare to what this software offers. Thanks for the great explanation.

I am glad that you like the Repair Layers. And thanks for the kind words.

Great. I’ll try… But I would love to see a video of the whole procedure.

Thanks for your comment. I’ll make a note of that.

I’m still on the fence about putting out the money but the new upgrade are so wonderful I’m sure it just a matter of time. I really like what the team has do with this software outstanding to say the lease.

We are very happy to hear. Thanks for your comment.

I suggest that you need to mention that if we have a previous version of Capture One 7 Pro installed, and then install Capture One 8 Pro, we have to upgrade the engine to get this feature.

Yes, that is correct. Images can be upgraded in batches too.

Thanks for your clear demonstration. This is the new feature I most wanted to see in C18.

Peter is so right… The Heal/Clone feature now removes the last reason I have for keeping Photoshop on my machine.
After a sluggish machine when I initially installed Ver 8, I was advised to set hardware acceleration to “Never”. This has fixed my last problem, and now I’m in love again!
CO-8 is my partner for life!

Have looked at your software, but found it would not import the pictures from my Nikon D810 – the software just crashed (Mac) Do you have a time frame for introducing compatibility with this camera, which has now been out for some time?

Hi,
indeed, the layers are a powerful and usefull tool.

But what I several times discovered is, that the overlay (repair part) is less bright than the surrounding. Even the selected part has the same brightness as the part which
will be repaired.

I try to cover this by adjusting the brightness in a copy layer.

with the new version 8.0.1 I do not have the descibed proplems anymore.
All works perfect!

A grey square the size of the brush appears when I use the spot removal tool in C1-8. Is there any explanation for this to happen?

I would suggest contacting support and also making sure you are running the latest version of Capture One. 8.0.1.

It is certainly not normal behaviour!

Hi Niels
Just wondering if in that last paragraph you actually mean that it DOESN’T work on the raw file? as usually Capture One emphasises that you leave the raw file alone?
See below
“The Repair Layers in Capture One Pro 8 work on the raw images. This gives you full freedom to work with the image and to do whatever adjustments you would like to do with the image both before and after you have done a Repair Layer.”
Interested to know. Thanks for the blog 🙂

Sorry if it was unclear.

I think the phrase “works on raw images” caused a misunderstanding here. Antonia seems worried that the feature may not be non-destructive and actually modifies the raw images.

The correct answer is: this feature works on raw images (i.e. its input data comes from the raw images) but like all adjustments in CaptureOne, it is non-destructive and does not make changes to the raw images.

Very good article, thank you.
As a wedding photographer I used for more than 6 years Lightroom. No i did switch some months ago to Capture One. The best software.

Ther is only ONE very important thing, I do miss in Capture One for my clients. When i do email pictures, the mail app in OS X does open a new email for every picture.

Lightroom did open one single mail for all the pictures i did select. If i want to sent clients 6 or 9 pictures for evaluation, it is very painful, when Capture one opens mail app six times and only one single image is in it. This might be fixed. Would be great.

I am glad that you liked the article.

If you create a web contact sheet from within Capture One Pro 8 (under File), you get a folder structure containing only the image you have selected.

Compress this folder and attach it to one single e-mail.

If I am not mistaken, a heal layer can only have one reference point offset, so everything that is painted in it takes its reference data from the same offset relative to where it is painted. In many cases you may need different offsets, which means that you have to create many heal layers. That’s okay, but it can lead to an inflation of layers and you can lose the overview. Therefore hierarchical layer groups would make sense. But it would be even nicer if you would find a way to somehow manage multiple reference offsets within one heal layer.

Still missing the tool to Blend images in Capture One like in PS. In PS i used that tool a lot, and now im missing this in Capture one. Why could Capture one this not include? I would love to use just Capture one instead to use PS from time to time.