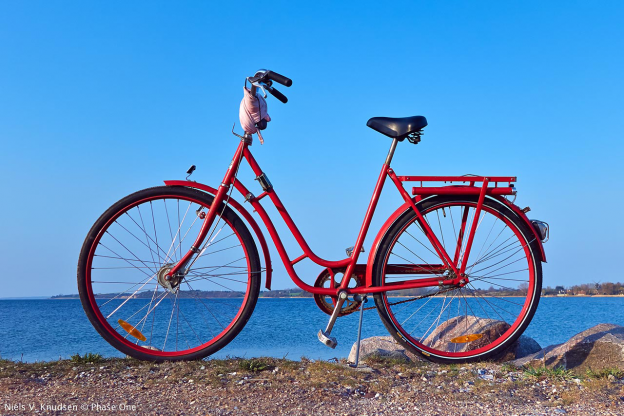 Purple fringing occurs because the lens doesn’t behave the same way on all the different wavelengths of the incoming light. This is of course something that the lens designer tries to compensate for, but lenses are almost never perfect.

Purple fringing is often related to how much the lens shows chromatic aberration and it is more likely to see purple fringing when using a lens wide open compared to using it stopped down.

The Lens Tool in Capture One Pro 7 offers a method to remove purple fringing from your images.

The image to the left shows purple fringing along the spoke that reflects the sun. To the right you see the image after having applied “Purple fringing” correction in the Lens Tool in Capture One Pro 7.

When using the purple fringing correction, Capture One Pro 7 uses an intelligent algorithm that takes the behavior of light in a lens into account. The algorithm can estimate the original color underneath the fringing and it is not just a simple desaturation of the purple color.

In the image below you can see how the purple fringing correction algorithm in Capture One Pro 7 can bring back the blue of the sea along the spoke. I have also made a simple correction by doing a simple desaturation of the color of the fringing to show you the difference:

In the image in the middle the purple fringing is removed, but an unnatural gray edge occurs instead. In the image to the right you can see that the fringing has been removed and replaced with the color of the blue sea.

Wide-angle zooms are often prone to fringing. In the examples below I have a strong contrast against the bright sky.

This is a zoom into the top left corner of the image. The purple fringing is seen on the dark side of the edge between the bright sky and the shadow side of the wooden construction.

The “Purple Fringing” algorithm in the Lens Tool does a very good job of removing the purple fringing in most images. But as the algorithm has to deal with colors and contrast in an image, it may not always remove all the fringing as it can be very difficult to distinguish between fringing colors and real colors in the scene.

In such cases you will have to desaturate the purple fringing color using the Advanced Color Editor in a local adjustment layer.

Hello Niels,
This is fantastic! Thanks a lot for posting this solution. The combination of the purple fringing correction and the desaturation in the advanced color editor has removed all undesired fringing wthout losing any sharpness. Thanks a lot!

Reply
The Image Quality Professor
May 4, 2014

Thanks for your comment. Glad that it was helpful.

Reply
The Image Quality Professor
May 4, 2014

We’ve been experiencing some issues with the blog in the last couple of days. Unfortunatly it has not been possible to leave any comments. But the issue has been resolved now, so if you haven’t seen your comment/question posted, please repost it and I’ll reply as quickly as I can.

Have a nice Sunday everyone.

Why is purple fringing not covered by CA removal?

Reply
The Image Quality Professor
May 6, 2014

The Chromatic Aberration, that automatically gets removed when using a Lens profile in Capture One, deals with the type of Chromatic Aberration originating from the problem that the focal length of a lens is depending on the wavelength of the light.
When this is the case the magnification of the R, G and B plane in the image are not the same, resulting in slightly misalignments of the color planes. The different magnifications can be measured and to fix the problem you basically apply individual magnification corrections to each color plane.

Even though that Purple Fringing is related, the problem of the lens acting a little different depending on the wavelength of light is something you cannot correct by simple means. Our advanced Purple Fringing algorithm needs to analyze the image for the fringing color and verify that it actually is caused by fringing and not just a color that naturally exist in the image. When working with such algorithms there will always be a tiny risk that the algorithm tries to remove colors, it shouldn’t have removed.

I’ve long seen the check box, thanks for showing us exactly what it does.
Tom

Reply
The Image Quality Professor
May 6, 2014

I’m glad that it was helpful.

I recently switched to Capture One and am loving the software. The only issue I have is with its ability to fix fringing.

When using Samyang lenses wide open, I get terrible and hard-to-fix purple and green fringing. I used to solve this in Lightroom by pulling both purple and green fringing sliders to the right and adjusting the green hue, which virtually eliminated the problem. In contrast, Capture One’s Purple Fringing “Defringe” slider only makes barely noticeable reduction in purple fringing.

Am I doing something wrong? Please let me know if there is any way to fix this in Capture One.

Many thanks in advance
Marek

Sounds great that you switched to Capture One Pro 8 and you enjoy working with it.

If the tool doesn’t fix it, then you can use a Local Mask and the Color Editor to pick and desaturate the false fringing colours.

But I would very much like to take a look at the image, so we can improve the tool for the future.

If you can send it via: http://www.phaseone.com/en/SupportMain.aspx

I will take a look at it.

I have a similar question, in the attached pisture are some green fringes on the edges of the window frame. In Lightroom they are easy to remove. I would love to have a way of removing those within C1 without a mask. Thanks, Morris

Thank you for you feedback. An improved fringing suppression is an area were have focus on.

Hi Niels,
how far are you with developing an improved fringing suppression?
I have some lenses which produce green fringes wide open and I have to run the images through Lightroom to fix that at the end of my process.
I would love to get rid of that procedure.

Thanks and kind regards,
Morris

Thanks for your question. As you know we are always working on improving Capture One and this is something we are focusing on. Sorry that I can’t be any more specific than this.

I’m currently running C1 V10 and there is still no improved fringing correction. Only purple. Any hope that it will make it into the next release? I´m in love with C1 but I miss this little thing a lot.

Hi, I’m currently evaluating C1 to replace Lightroom, I have the same issue as other people above, heavy green fringe with some lenses, would love a green fringe feature!