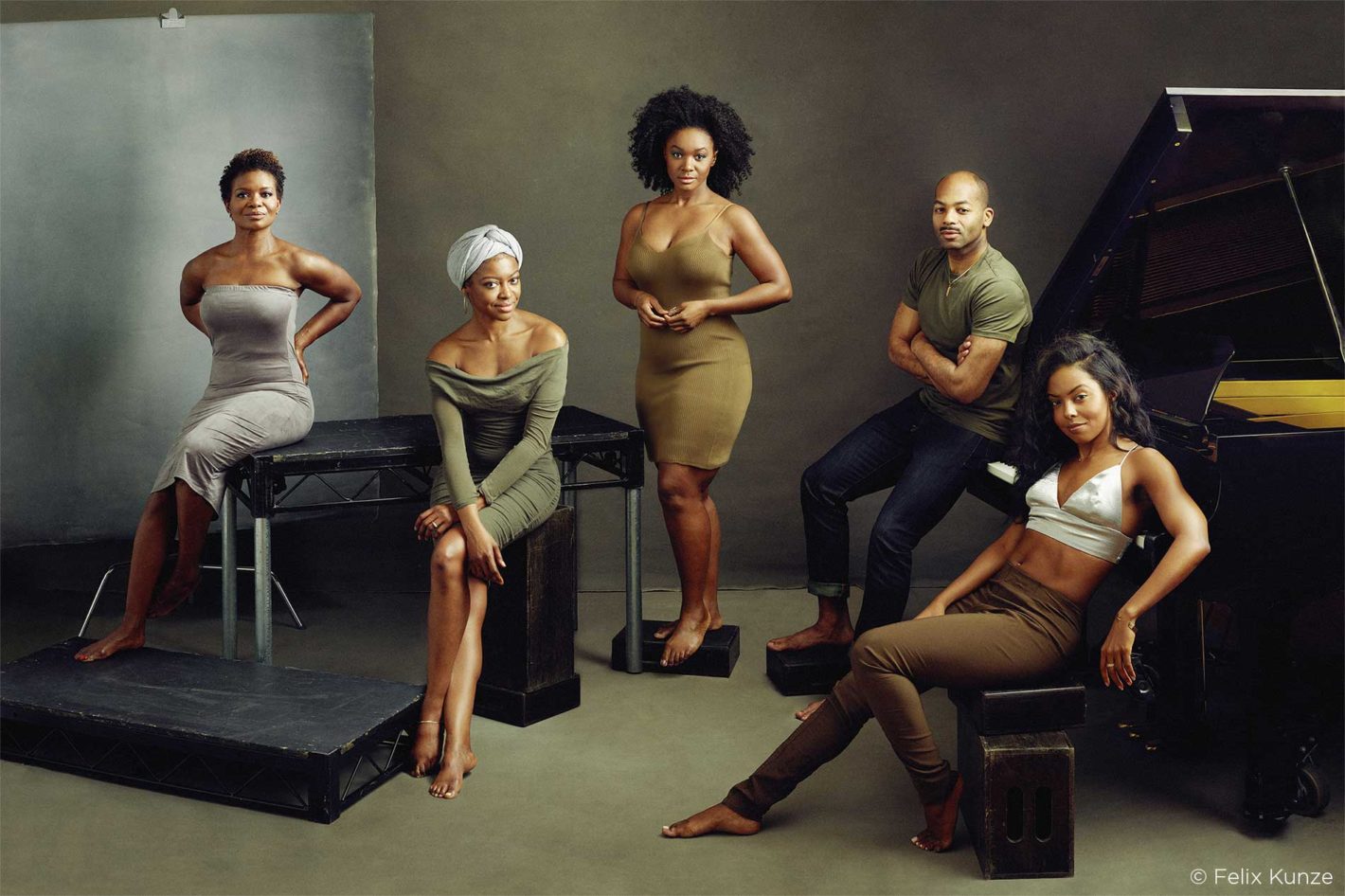 Years ago when I was doing sweaty production shoots at tech rehearsals for London’s West End shows, I never thought I’d be asked to shoot a portfolio shot of Tony nominated Broadway stars in New York. So when BroadwayBlack asked to to be involved in their highlight of this year’s black nominees, I didn’t have to think long to say yes. It’s the culmination of so many of the different areas of photography I’ve become interested in over the years. To combine something that’s anthropologically important, culturally current and aesthetically pleasing. As a photographer, that ticks all the boxes.

One way that I gain an advantage in this competitive industry is to maintain a certain standard when it comes to lighting and posing. To achieve this, I love to do lots and lots of light testing.

I live in a large loft apartment in Brooklyn, with a fair amount of space, which means I can easily test from here. Having the opportunity to test before the shoot makes it a lot easier to plan ahead and be prepared.

For a big big job like this where there is celebrity talent, where timing is tight and scheduling is a challenge, I had to plan out my poses, plan out exactly what my lighting setup was gonna be and make sure it worked. There’s a big difference between a lighting diagram jotted down on a napkin and one actually executed in the studio and one that looks good!

Light testing gives me a chance to take the pressure off myself, shoot with friends, no clients on set, take my time, let the process take over, explore new things, mess around.

While these aren’t the final poses or exact lighting setup we used on the day, it helped me find my way in the process. I feel it is important here to show my process when I do these group portraits, how much planning goes into it. So while these images are very low-grade composites, not meant for final publication, they really help me and the team to see my vision. I sent this to my producer and the publication to give them an idea and they loved it. I also printed it out to show the talent on set.

To achieve this swiftly and efficiently, I tethered Phase One XF 100 MP straight into Capture One Pro 9, applied my basic colour curves, exported and then composited the images into Photoshop. Because we didn’t know how many nominees would be in the final shot, I did a test with 4 and one with 8 subjects, just to be prepared.

Because of the challenges of scheduling and location (these guys all have shows to perform in, 6 days a week), we couldn’t drag the talent to studios miles away in Brooklyn, we had to stick close to midtown Manhattan. To avoid expensive studio locations, we found a rehearsal space, Pearl Studios, that was close enough to the theatre district. I went and scoped it out, my producer solved the problem of getting 14’ backdrops up to the 12th floor (elevators are too small) and we schlepped a van load of equipment up a passenger elevator.

The backdrop & corresponding floor, sourced from Oliphant, transformed a plain rehearsal space into something a little more visually appealing and befitting the glamorous talent. The space just happened to have a grand piano for us to use, so naturally in it goes. For lighting I used two battery powered Elinchrom ELB 400 packs and my trusty Elinchrom modifiers. We kept it fairly simple, as usual.

Everything was set… Now I just needed to actually shoot!

I set the Phase One XF 100 MP on a tripod, marked it down, and started putting together the shot, one subject at a time.

My focus on every shoot is to get all the technicalities out of the way, to focus on making the talent feel comfortable. I tend to start that while they are in hair and make-up. My general rule of thumb is to make some jokes, get them to react in a genuine way, where I feel that they are on the same page as me, to gain trust before the subject even steps foot on set.

First up was LeChanze, who is actually a previous Tony Awardee and agreed to be part of the shoot, to pass the torch to the next generation. She brought her Tony award but I decided not to include it in the shot, I wanted to create a timeless image. Instead I highlighted her by giving her separate backdrop to pose in front of. This elevates her importance in the shot without any pretension.

Then it was Pascal Armand (Eclipsed), Saycon Sengbloh (Eclipsed), Brandon Dixon (Shuffle Along) and Adrienne Warren (Shuffle Along). For each of them, I tried to set the mood by generally being silly, energetic and doing unhealthy amounts of mirroring (demonstrating poses). Below is me doing my best ‘Beyonce in the wind impression’.

We tethered the entire shoot into my laptop, using Capture One Pro 9, replete with the extra-secure jerk-stopping piece of tape on the USB cable.

Obviously the end result is very different from the light test, but that’s just how things end up working out. No shoot I’ve ever done worked out exactly to plan, and that’s part of the beauty of photography. I like the result more more, with each person existing in their own space within the image.

To achieve individuality, I interacted with each subject enough to get an idea of the kind of pose that would work for them; for example, that’s how LaChanze’s effortless beauty and Adrienne’s ‘athletic cool’ really shines through. The goal is always to show personality. I want them to feel comfortable, they aren’t models, I want their individual characters to show.

For a composite shot like this, the 100 megapixel capability of the Phase One XF 100 MP really shines, it allows me to get a depth of detail that gives us complete control. Compositing people into images is always more complex than it initially appears, we start to get into parallax issues, details not quite matching up, etc. But having pixel depth gives me options.

On tight schedules, options are everything. A complicated composite like this is made much easier because we’re using the best equipment available.

Felix is a portraiture photographer living in New York City. As well as a bit of photo assisting for Annie Leibovitz in New York and Mario Testino in London, he shoots a lot of portraiture as well as assignments for agencies like Getty Images, WireImage, the Redferns Music Library, Getty Travel and others, including my celebrity portraits over at ContourPhotos.