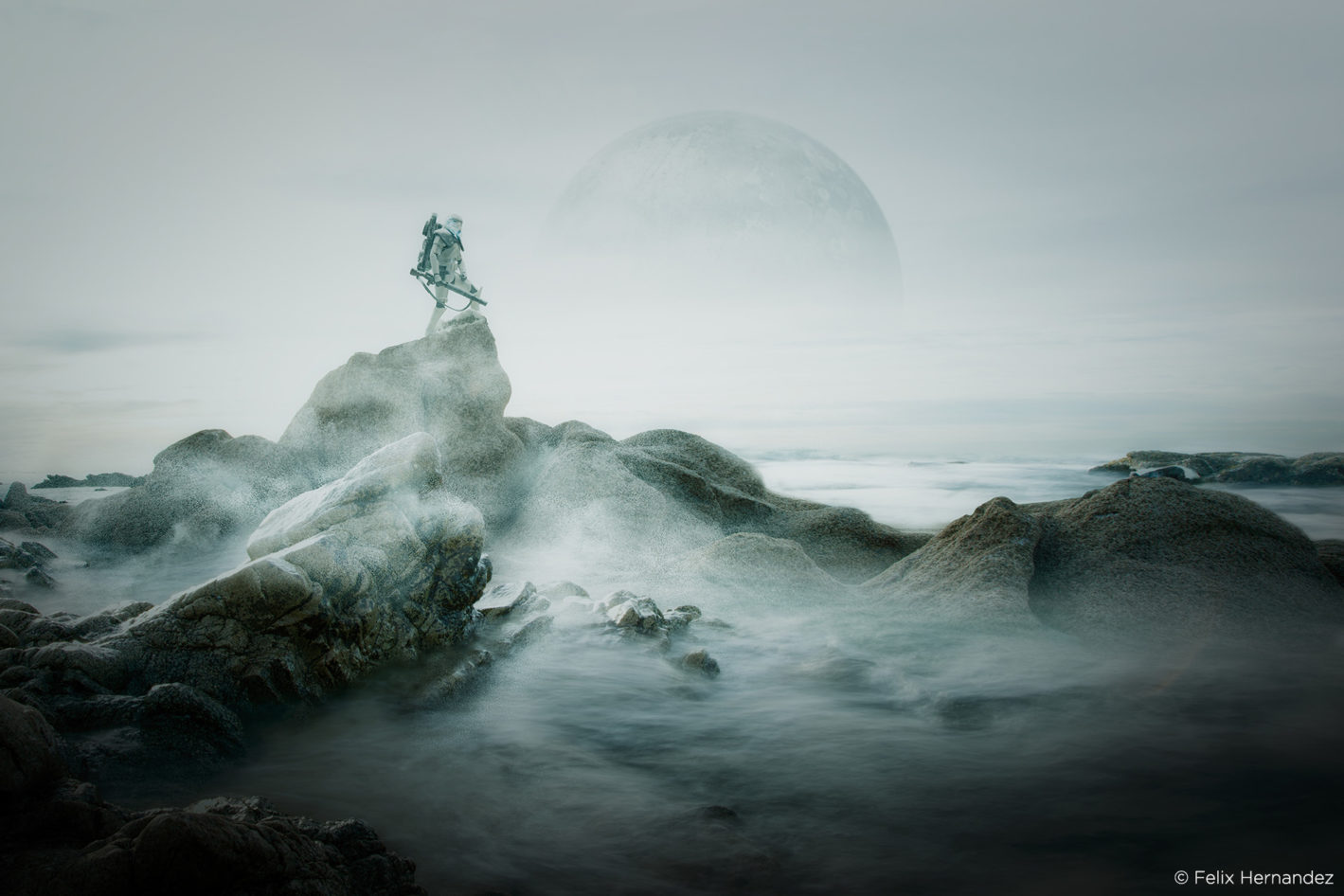 I remember as a child I used to spend hours alone in my room playing with my toys. I also remember that the best part was customizing them and creating worlds where they could exist. Now that I am “grown-up” I realize that I never stopped playing and that the only difference is that now I do it with a camera in my hands.

Photography and digital art have given me the possibility to bring scenes of my childhood imagination to life. Photographing scaled models is not so different from other disciplines of photography, but it has its peculiarities. You have to think big, but at the same time small. The possibilities are endless and there are no recipes. You just have to use your imagination.

In some ways I feel like a landscape photographer, which I’m not. I also feel like a portrait photographer, and again, I’m not. I think I’m a product photographer, but… I’m not! So, what am I? To me, it doesn’t matter. I love all kinds of photography disciplines and techniques, because mixing them allows me to create my own vision and share my stories. Photography and digital art have given me the possibility to bring to life those scenes I had in my head as a kid.

Myth Mountain was the last photo I did of the series ‘Troopers’, using the Black Series Star Wars figures and for it I wanted to do something different. Before Myth Mountain, all of my photos were done in the studio, and in many cases I inserted stock images for the backgrounds. For this last image I wanted to capture the scene for real.

I went to Los Cabos where I knew I would find the kind of rocks I was looking for. I needed them in the water, not because I wanted to do a sea scene, but because I wanted to give the effect of heavy mist or fog. To accomplish that I used a long exposure shot which would convert the water movement into heavy, low fog. I didn’t care about the over exposed sky since having it almost white would help to integrate all the images better.

I tried for over four days to get the shots on location since I was looking for a soft light. For that, I needed an overcast day. The quality of light is very important to tell a story as it sets the mood. In the studio it’s easy because you’re in control of it. But on location you have to seek, wait, and be patient. Sometimes you have to keep going back to the same spot for several days until the conditions are just right for what you are looking for.

Bringing the imagination to life

Myth Mountain is a mix of studio and landscape photography. I used a total of five different photos and composed them into one:

For the production in the studio I used common products:

I love photo manipulation and digital art. But if you can do most of your project in camera, it enriches the final product in many ways. It’s not only fun, it also gives the image a more realistic look.

For example, if your model is in the snow, use your imagination and create a snow scene. I use wheat flour to create snow. If I need to create a desert, I use corn flour. If I want to add some atmosphere, I use smoke from a cigarette. You don’t have to smoke, but I have found that it’s the best way to control small amounts of smoke and put them where you want. To get rainy days, I spray water mist. If I want to make droplets, I use corn syrup and if I want to freeze something, I use compressed air. You can use fog machines, wind machines, dry ice, etc.

The possibilities are endless and there is no recipe. Use your imagination and try different things. Most of the stuff you will need are at home or at the store around the corner. Be creative!

Getting the scale right

Scale is one of the most important aspects. If what you want is to give a sense of realism to your scaled models, you will need in many cases to get closer with your camera. You could think that using a Macro lens would do the job, but the problem with Macro lenses is that they have a shallow depth of field. That means that you will only have a shallow focus plane and the rest of your subject and scene will be out of focus. That would be a downfall for our purpose in making small scale models look real. That’s the way our brain has been taught to perceive scale. In the case of the Storm Trooper, I had to do focus stacking. Below is one of the photos I used.

I shoot my models by mixing studio flashes, light painting techniques, or natural light. It could be similar to shooting a product, but again, if you want to give the sense of realism you have to think in scale. It’s not the same to shoot a real human model with an octabox than to shoot a scaled model with the same octabox. The quality of the light would be softer as the light source is bigger when used with a scaled model. So, all the basics of lighting in studio or at location will apply but take them to a smaller scale.

Post production will give the final punch to your image. Here you can insert elements to your backgrounds, objects that complement your story telling, effects that could be complex to do in camera, or add a sense of motion, color grade for the mood, etc.

For me, photography is a mixture of playing with different techniques and disciplines. The technical aspect can be learned relatively easily, but the hard part is hidden in our minds and in our hearts. It’s a matter of staying childish and curious. It’s about re-learning how to play like you did when you were a child.

The Crow & The Dove – © Felix Hernandez

Though his work is difficult to categorize, Mexico based photographer Felix Hernandez considers himself a photographer and digital artist. Photography and digital art has given Felix the possibility to bring to life those scenes that he had in his head when he was a kid.

What a delightful take on photography, and really inspiring!

Thanks Tomas… I really appreciate your words!
Felix.