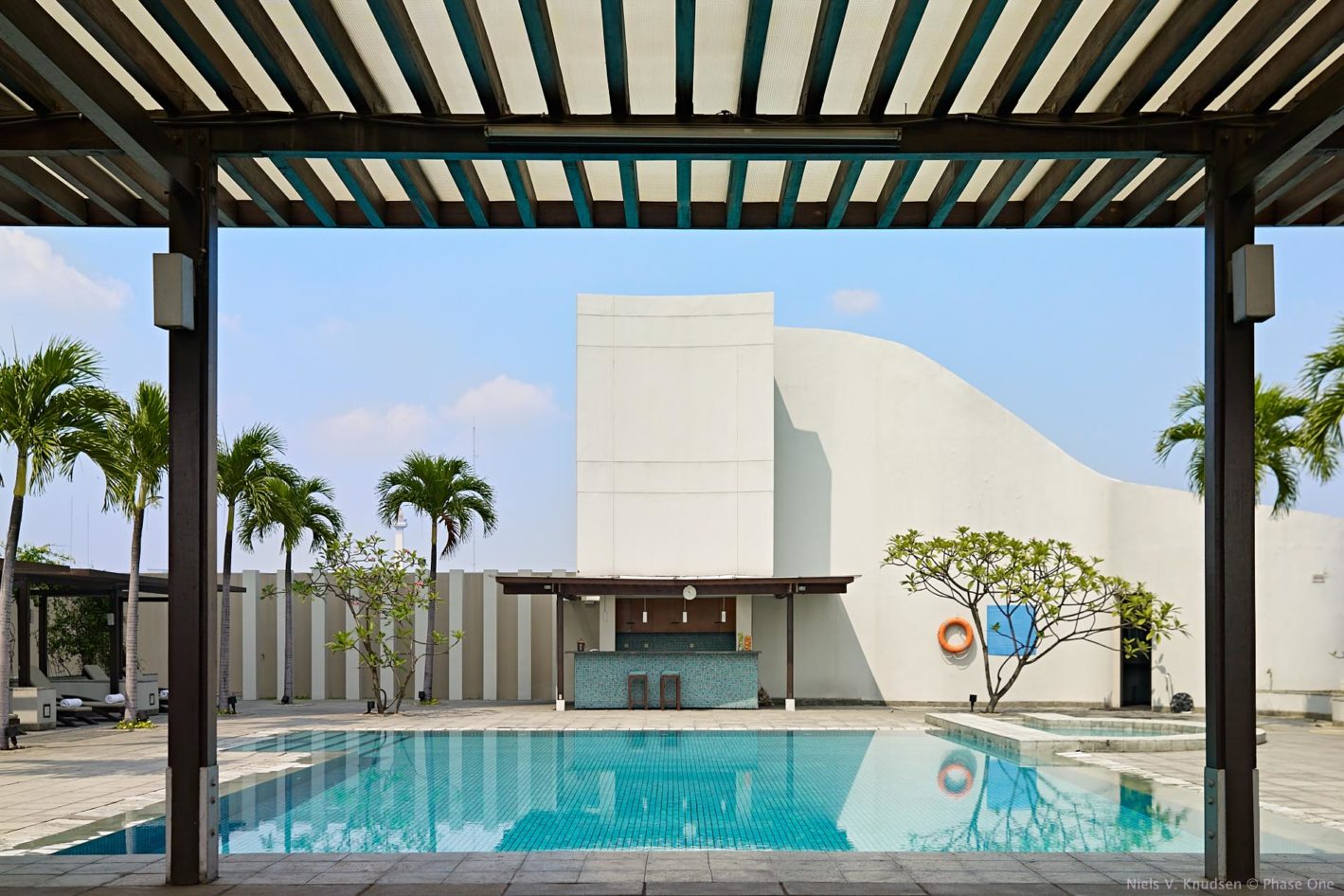 When using a DSLR camera or a Phase One camera, lens metadata information will automatically be added to the RAW file.  From the lens metadata, Capture One Pro 9 will know if it is a supported lens and, in case it is, automatically apply lens corrections to the image.

When using an older manual lens, for instance via a simple adapter, or perhaps using a technical camera, there will be no metadata describing the lens.

Other data like the aperture used for the exposure of the image is also missed, so lens correction will not automatically take place.

Using a technical camera with lens movements makes it even more challenging when lens corrections need to be applied. Despite not having proper lens metadata in the RAW file, the Lens Tool in Capture One Pro 9 still has some options for applying lens corrections.

In the first example, I have been using a 100% mechanical and manual lens on a Phase One Camera and the raw file does not contain any information on lens name, focal length or aperture. Therefore, I have to make some notes or simply use my smartphone to document the shoot.

When you load the image into Capture One Pro 9 and look at the Lens Tool, it will just show a Generic lens profile without any default corrections.

The lens used for this image shows a bit of barrel distortion, as well as some chromatic aberration, so I want to correct these artifacts.

For this image, I was using an older Phase One 45mm TS f/3.5 lens, which is a lens supported by Capture One Pro 9. To select the lens profile, I will have to pick it from the ‘lens profile list’ under ‘Phase One lenses’:

After the right lens has been selected, the image will automatically be corrected for Chromatic Aberration and distortion. If I had been using a lens that was not supported in Capture One pro 9, I would still have the possibility to do a chromatic aberration correction. If you would like more details on how to do this, read the following blog post:

When fixing distortion on a non-supported lens, you will have to try if either the Generic or the Generic pincushion lens model can fix it. For many lenses, you can actually bring down the distortion to a level where it is not noticeable any more, by using these generic lens profiles.

Furthermore, I will correct the keystone. Since this image has a dominant rectangle, I will use the Keystone’s cursor tool:

Next, I carefully place the four alignment circles on the corners of what I would like to be shown as a keystone free rectangle in the image.

To finish the image, I did a minor color adjustment on the blue sky with the Color editor.

In the second example, I have been using a technical camera to create a keystone free image of a building by shifting the lens 5 mm up.  I was using the Rodenstock ALPA HR Alpar 4.0 35mm lens; a lens that is supported in Capture One’s Lens Correction Tool.

Even though the image was taken with lens movements, it is still possible to correct for light fall off, chromatic aberration and distortion, as long as Capture One Pro has the information about the lens movements and the aperture. The raw file does not contain any metadata information on the lens, the aperture or the movements of the lens, so I have to record this information, as mentioned previously.

In the lens correction tool, I do the following:

Final image after LCC-, lens correction and a bot of Color Editor work

It can be a little more challenging to decide the sign for the movements when doing horizontal movements. Here, the rule is that if you stand in front of the camera, the lens movement to the left is “-“ and movement to the right is “+” – like on a classic XY coordinate system. But, if you mount the camera in portrait mode, you may lose track of the directions of the movements, as up and down shifts now should be interred as shifts in the Y direction.

Actually, there is a trick to determine the right sign (+ / -) when entering the movements:

In the above example, I am testing according to the description above, whether to use + or – in my movements.  In this case, shift Y at = +8 leads to a much more even LCC file than if I entered -8, indicating that +8 is right.

What about using a camera that is not supported by Capture One Pro 9? I use the Olympus E-PL6 and I can’t load the RAW files shot by this (unsupported) camera into Capture One Pro. Any way around that issue?

Sorry for the delayed response. If you convert the files to DNG, Capture One would be able to read the files.

If a lens profile is not included for a lens that has been shifted, is it possible for me to create my own profile to use with the movement settings in the lens correction tool? I can understand how a profile could be built for a tech camera lens, but how about a tilt shift lens such as the Canon/Nikon TS lenses where it isn’t possible to view the full image circle without stitching frames together?

Sorry for the late reply. Even with a generic profile you are able to specify the XY movement, which will guide the software for adding light fall-off correction as well as when performing chromatic aberration analysis and correction. You can save this as a preset for this specific movement for the lens.

Coming from LR where the list of lenses where allways up to date I wonder what I should expect from CO in terms of time it generally takes from a lens is on the market til when I can find the lens in CO ?

Hi Nils, thanks for the write up!

Unfortunately, I can’t get the “Movements” tool to work.

I am using C1 (10.0.1) on a Macbook running macOS 10.12.2: I am using the Samyang 24mm f3.5 Tilt-Shift lens on my Sony Alpha 7.
In order to correct for the pronounced barrel distortion this lens produces when shifted, I enter the proper shift distance in the Lens Correction tool’s “Movement” tab and then add around 20% distortion in the “Lens” tab of the same tool. This corrects the distortion perfectly, great job C1!

Unfortunately, as soon as I do this, the histogram, levels, and curve tools do not show graphics anymore. The color picker also doesn’t show values above the preview. Also, if I click into the image with the color picker tool, C1 processor load goes up to 400% and the software becomes very unresponsive. As soon as I set the “Movements” tab values all back to zero, everything is fine and working properly again.

P1 support only suggested to work without histograms etc, which is not a viable option of course.

I also tried disabling OpenCL, to no avail.

I also tried using the “Movements” tab with other RAW files (Leaf Credo .IIQ, Olympus .ORW), with the same bad results. So, it seems to be a general problem with the Lens Correction tool and not specific to Sony .ARW files.

How can I use the “movements” tab properly?

We are constantly adding more lens profiles to Capture One. Currently, however, I’m unable to say when the Nikkor AF-S 18-35mm/3.5-4.5 ED will be added. But in the meantime, I would recommend that you use the generic lens profile. With this profile, you may need to adjust a number of settings to cover the zoom range and your aperture range. If your lens at a given zoom range primarily shows either barrel or pincushion distortion, then simply select one of the Generic profiles and use the distortion slider to minimize the distortion. Typically, wide zooms also show quite a bit of chromatic aberration. This you can fix by clicking on the Chromatic Aberration option in the Lens Correction Tool. Your image will now be analysed, and a Chromatic Aberration correction for your lens is made. Next, save a Lens Correction pre-set with both the Distortion and the Chromatic Aberration correction. Finally, you’ll need to name the pre-set, for e.g. “Nikon 18-35mm at 18mm f8”. If you are primarily shooting landscapes using the lens at, for instance f8 – then you can expect to be able to use this pre-set in the range of 5.6 – 11.

Hi Niels
I wonder if there is an option for GoPro lens profile, I shot in jpeg and the lens correction is not available. I need to crop, straight and correct the distortion, finally export to FHD (we did a 2 year timelapse every minute with 4 Gopro)

Hi Niels,
Thank you for your trick to determine the movements in a LCC shot. I wonder if there would be an even more direct approach. Movements on a technical camera and the Rodenstock 23mm (which comes with considerable distortion) are part of my daily tool box. Any device that would directly and clearly depict the relative movements off center could be helpful. Would you please support me in trying a pinhole lens cap? How does the off center distance in the resulting photo relate to the figures used in the C1 tool?
Thanks, Roman