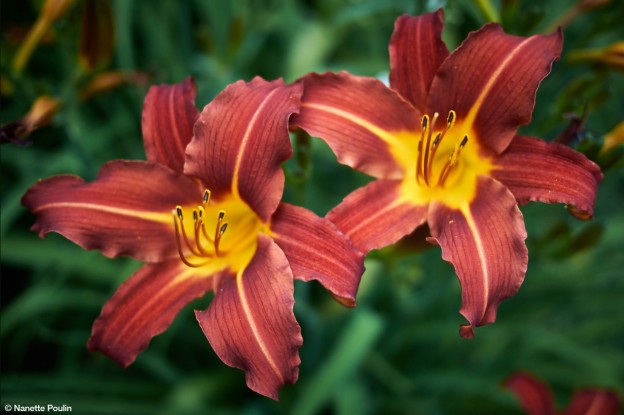 Naturally, Capture One 7 has a Saturation slider to control this amount and it can be found in the Exposure Tool.

In Capture One 7, when adding a positive value to the Saturation slider, the amount of saturation increase is applied in a non-linear way. This means that areas of the image that are relatively saturated have less of an increase compared to those that do not.

The benefit of this implementation is that it prevents the “over-cooking” of images, which results in an overly saturated and unnatural look.

When applying negative saturation, the effect is actually applied in a linear way, effecting all colors by the same amount.

In the following image we have plenty of saturation in some areas of the image, even with the Saturation slider set to zero. Take a look at the RGB values for both of the areas.

Now, if I increase the Saturation slider to +20, let’s see what happens to those same values.

Notice that the already saturated central part of the flower doesn’t change much in terms of the RGB values, but the outer leaf, which was less saturated, has had a greater increase.

If we apply a negative value to the slider, all saturation ranges are affected the same.

I hope you can see that the Saturation slider is more than just a simple ‘Add’ or ‘Remove’ tool and that it is yet another one of Capture One’s sophisticated tools.

Does not make sense to me, are you sure the RGB values are assigned to the correct flowers?

What are you not sure about Pete?

I think that the second value are of the first image!

I can see Pete’s point David, it does look as if you’ve got the images mixed up. In the blog post examples the second image looks less saturated than the original. Paradoxically, when viewed at full size it’s a different story – the second image is more saturated. I wonder if the backgrounds have anything to do with it? The blog has a white background but I’m viewing the full-size images against a black background (using Firefox). Perhaps the Image Quality Professor can explain this bizarre effect!

Same comment as Pete. After you increased saturation to +20, the r value stayed at 177, the g and b values decreased and the white value actually decreased from 118 to 111. Yet, the flower did show an increase in saturation.

Hmmm… there is definitely something up with how the images are represented! Ill regenerate them and repost.

However, the ‘R’ valuing staying the same doesn’t necessarily mean the indicated colour is not gaining saturation. To verify I exported the image into Photoshop and sampled the same area whilst slowly increasing saturation. The Green and Blue values decreased before the Red value increased, for that area on that particular image.

I disagree that the second image looks more saturated in the blog – at least on my screen. However, if saturation did increase then a decrease in RGB values is exactly what you would expect since a more saturated colour is a darker tone… isn’t it?

Images have now been updated. Sorry for the confusion!

The revised second image still looks LESS saturated to me; I don’t think it’s a problem with your original images though. I see your blog is powered by WordPress. If you Google “WordPress alters colours on resize” (or similar) you’ll see this is a common issue.

WordPress is a great blogging platform but for a blog where finely nuanced images are the main subject matter simply relying on the CMS to compress & scale images probably won’t cut it. Do you use a specialist plugin to handle your image content?

On my platform (Mac OS/Safari) the images look as they should.

However, I’m sure the blog editor will look into it.

Dear David,
the Apple platform uses its own rgb profile, this is different to the common sRGB IEC61966-2.1. So whenever your apple rgb pictures go to a windows machine, they will be converted to different rgb colours. You must replace the original Apple generic rgb to a patched sRGB profile in the system-library (Root/System/Library/ColorSync/Profiles). Please rename the new patched srgb in “Generic RGB Profile.icc”. Restart is necessary.
Maybe this is the solution for your problem, you will find more information on www “rgb patch mac apple”
Joerg

I’m still a little unclear as to the solution to the Apple rgb problem. The optimum outcome would be to have any windows machine display the colours as they display on any apple machine, but the fix suggested requires that the mac’s monitor be turned off and only the attached external windows monitor be on to run the script. How does it work if you are not running an external windows-type monitor but simply want to have any display, windows or apple properly show colours?
Thanks for any help.

The issue being discussed is regarding how WordPress (The engine running this blog) displays colour cross-platform, and nothing to do with the feature outlined in this blog post. It is not something you have to remotely consider when using Capture One.